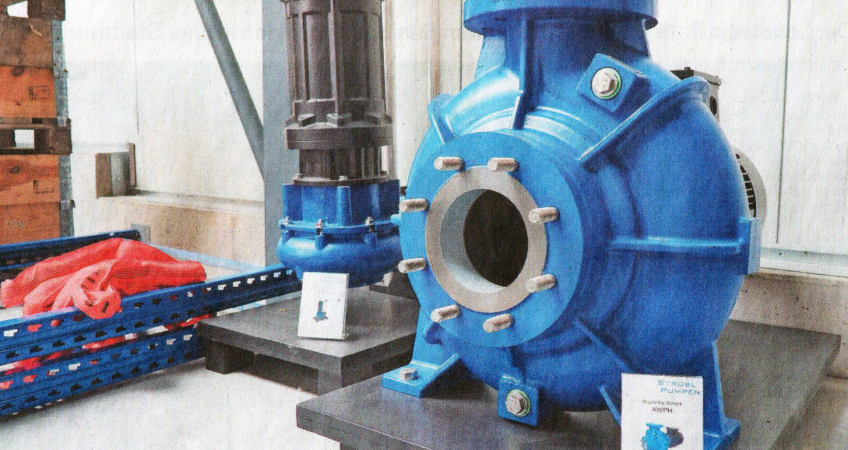 Hilpoltstein (RHV) – More than a century was oil, the lubricant of the economy, without which no industry seemed to be possible. But this oil must be first extracted from the earth’s interior, such as from an oil rig in the sea. Since late last year the platform “Edvard Grieg” in operation at the west coast of Norway. In this platform are working machines of company Strobl pumps from Hilpoltstein. “While we do not pump the oil out of the earth, but our machines ensure the cooling cycle, the water supply and the lubricant distribution on the platform,” says the managing director Robert Strobl. The 56-year-old industrial designer worked years in the distribution of a pump manufacturer, until it went into bankruptcy. Out of necessity, he founded his company in 2006 together with his son Christopher, who was still a student then and now cares as an operation manager to purchase, production and planning.

Robert Strobl has started in a 14-square-meter basement office in his onw house. Together with a designer, he designed three dimensional models on the computer and sent the data to a CNC-Machining processing company in Georgensgmünd. After machining the items were then assembled in Hilpoltstein.

In 2010 an office building with assembly hall and warehouse was built at the industrial area “Am Kränzleinsberg” in Hilpoltstein. Seven employees work there to take care of planning, sales and installation. An employee is working in Northern Germany sales area. To date, have to help in the assembly now holiday workers. “Our goal is to continue to adjust another employee,” says Strobl. The business is currently being pretty good, even in the holiday season, the work is inevitable: “We are not dependent on the seasons, someone always needs pumping systems”.

“A mainstay of the company are pumps for waste water and environmental systems. But also for the oil-, gas- and food industry, there are pumps from development by Strobl Pumpen in Hilpoltstein . Build can do almost anything. “Only physical limits we can not be lifted. Unfortunately, even if a few customers would sometimes wish that,” says the 32-year-old Christoph Strobl.

“The cheapest pump in the market we don´t offer”, says managing director Robert Strobl. That is not the company’s philosophy: “Price war is nothing what we want, quality is important, so we can only manufacture in Germany.”

Then customizations are performed to special requests, such as another power, other drives or foreign standards that can take depending on the effort of a few days up to several weeks. Completely new planned pumps need from order to completion about 12 to 30 weeks.

In the Norwegian oil rig, the first pump could to go in operation in about 22 weeks. About 20 units from Hilpoltstein make the job there, the smallest weighs about  400 kg, the largest 3.5 tons. Often, an engineer comes up to the eight-man company, bringing an order and technical advice to us. “For Norway, we had to work through 1500 pages,” says Robert Strobl.

We only informed the process engineers with approximate pump dimensions. After the final workings of the platform was finished on the paper, it was not allowed to be different in dimension, “says Strobl.

“The first four years of independence were difficult, the support from the state was far away from good,” said Strobl recalls. Although there were a founding grant and a loan from the KfW. The conditions were difficult and the tax in the beginning was rather high.

Only the land search was not a problem. This year we built a new 450 square meters warehouse and assembly hall.

Actual Strobl Pumpen develops at the moment a new pump with explosion-proof electric motor of its own design. An authority just checked the product, the company hopes to bring it at the end the year in the market.

In addition to the Norwegian oil platform in a Swedish steel mill operate Strobl special high pressure pumps for acid. Even after India, China and Ecuador, the company has already delivered. But it must not be so far away: In the Hilpoltsteiner waste water treatment plan operate three of our sewage pumps for sewage water transport and circulation .

Productoverview    english Productoverview    german Productoverview    french Further documents can be directly found in the "Downloads" section.
Cookie settings
In order to provide you with an optimal experience, we use technologies such as cookies to store and/or access device information. If you agree to these technologies, we can process data such as surfing behavior or unique IDs on this website. If you do not give or withdraw your consent, certain features and functions may be affected.
Manage options Manage services Manage vendors Read more about these purposes
Show settings
{title} {title} {title}